My very first original design, made two years after I became a kite addict.

In 1992, before I had even touched a kite in my life, I was invited by Sala Drak & Tangosällskap (a group of friends from my small hometown) to join them to Cervia. I thought -Why not? As preparation we built a train of a deck of Tarot cards. The cells were Della Porta and we got a recommendation from a Danish “kite expert” on how to bridle: Apart from the two top lines going from top corner to top corner there should be two lines from the centre of each kite going to the top corners of the kite in front. At the Cervia beach we could not make it fly: each launch trial under the burning sun resulted in a mess of long tails and bridle lines that took half an hour the clear up. Only after borrowing a strong lifter kite we got the train up.

On my way back home I was contemplating on this; there must be a more simple way to make a train of rectangular kites: just one line and no tails.

In 1994 I successfully designed the A-Kross frame and used actual placards from the local newspaper Sala Allehanda as sail. This kite won the Gold Medal at Drakfesten på Gärdet (the kite festival in Stockholm organized by Konstfack Art School) the same year, and this prize is still my most treasured prize. 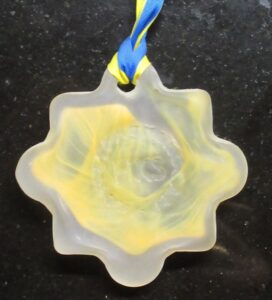 A very nice memory is from Bandar Lampung, Sumatra, 1995. I was flying the SA train when a grey haired Japanese gentleman came up to me and said: “Your kite looks like mine but yours have no tail!” That was legendary Eiji Ohasi and we became good friends.

Scroll back to top